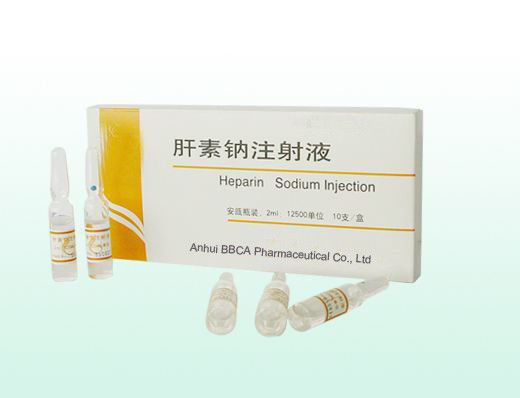 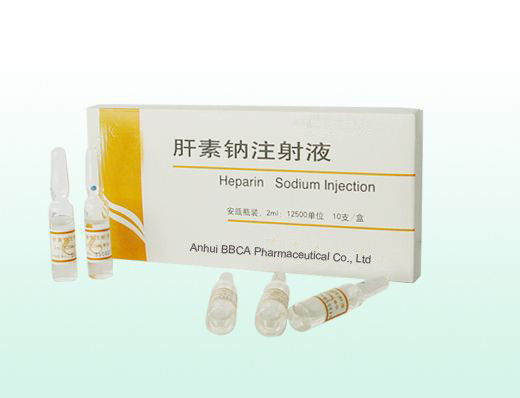 Common side effects include bleeding, pain at the injection site, and low blood platelets. Serious side effects include heparin induced thrombocytopenia.Greater care is needed in those with poor kidney function.Heparin appears to be safe for use during pregnancy and breastfeeding. It is a naturally occurring glycosaminoglycan.

Heparin's normal role in the body is unclear. Heparin is usually stored within the secretory granules of mast cells and released only into the vasculature at sites of tissue injury. It has been proposed that, rather than anticoagulation, the main purpose of heparin is defense at such sites against invading bacteria and other foreign materials. In addition, it is observed across a number of widely different species, including some invertebrates that do not have a similar blood coagulation system. It is a highly sulfated glycosaminoglycan. It has the highest negative charge density of any known biological molecule. In nature, heparin is a polymer of varying chain size. Unfractionated heparin (UFH) as a pharmaceutical is heparin that has not been fractionated to sequester the fraction of molecules with low molecular weight. In contrast, low-molecular-weight heparin (LMWH) has undergone fractionation for the purpose of making its pharmacodynamics more predictable. Often either UFH or LMWH can be used; in some situations one or the other is preferable.

Medical use
Heparin is a naturally occurring anticoagulant produced by basophils and mast cells. Heparin acts as an anticoagulant, preventing the formation of clots and extension of existing clots within the blood. While heparin does not break down clots that have already formed (unlike tissue plasminogen activator), it allows the body's natural clot lysis mechanisms to work normally to break down clots that have formed. Heparin is generally used for anticoagulation for the following conditions:
Acute coronary syndrome, e.g., NSTEMI
Atrial fibrillation
Deep-vein thrombosis and pulmonary embolism
Cardiopulmonary bypass for heart surgery
ECMO circuit for extracorporeal life support
Hemofiltration
Indwelling central or peripheral venous catheters
Cryonics

Adverse effects
A serious side-effect of heparin is heparin-induced thrombocytopenia (HIT), caused by an immunological reaction that makes platelets a target of immunological response, resulting in the degradation of platelets, which causes thrombocytopenia. This condition is usually reversed on discontinuation, and in general can be avoided with the use of synthetic heparins. Also, a benign form of thrombocytopenia is associated with early heparin use, which resolves without stopping heparin.

Two nonhemorrhagic side-effects of heparin treatment are known. The first is elevation of serum aminotransferase levels, which has been reported in as many as 80% of patients receiving heparin. This abnormality is not associated with liver dysfunction, and it disappears after the drug is discontinued. The other complication is hyperkalemia, which occurs in 5 to 10% of patients receiving heparin, and is the result of heparin-induced aldosterone suppression. The hyperkalemia can appear within a few days after the onset of heparin therapy. More rarely, the side-effects alopecia and osteoporosis can occur with chronic use.